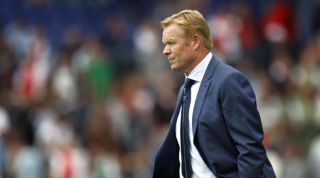 The Dutchman's first win in charge was not as straightforward as he might have hoped, with the Championship side enjoying the better of things in the first half at The Den.

That left Koeman with plenty to say at the interval and he eventually got the reaction he desired, with Jack Cork and Graziano Pelle opening their Southampton accounts.

Koeman told Southampton's official website: "First half was very bad. It looked like the team was playing on 70 per cent and, you know, it's cup football - it doesn't matter the level of opponent, you have to be 100 per cent or you get in trouble. We were in trouble in the first half.

"You can play bad, it's part of the job, but you have to give 100 per cent, and they gave more than we did - you can't accept that.

"We spoke in half-time and I was very unhappy. I'm happy about the reaction in the second half, it was much better, we dominated and we had more chances. We needed to score the second one earlier, but finally we got it."

Koeman closed with a word for close-season signing Pelle, who converted his maiden goal for the club in stoppage time.

"It's a great feeling for strikers, they look to goals. Of course they are happy if the team is winning, but if they don't score two or three games in a row then they are a little bit nervous." he added.

"Maybe this gives him the feeling and the confidence that he is a good signing."