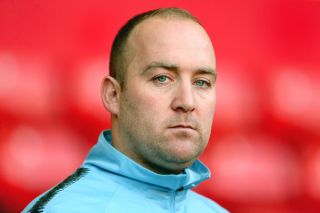 Manchester City Women boss Nick Cushing has vowed ahead of Saturday’s FA Cup final against West Ham that there will be no complacency from his players.

City head into the Wembley showpiece looking to claim their second trophy of the season, having won the Continental League Cup in February, and unbeaten in domestic matches this term.

Their two Women’s Super League meetings with West Ham, who are in their maiden season as a professional club and the FA Cup final for the first time, saw them beat the Londoners 7-1 at home and 3-1 away.

When asked if there was any danger of complacency with regard to Saturday’s clash, Cushing said: “I think in football there’s always a danger.

“We’ve seen those FA Cup games and FA Cup finals and other matches where the so-called underdog has beaten the team that everyone perceived should win.

“But my job is to coach this team and make sure they don’t become complacent whenever they play, whatever people say, and I think we’ve done that very well this season in the sense of we haven’t lost a game.

“All we’ll do is prepare the team to play a difficult game. We know for sure the 7-1 game isn’t a true reflection of West Ham. Yes, we were good on the day, but they were probably really disappointed in their performance. The 3-1 game when we played them at Rush Green, at 2-1 they’ll feel like they were in the game.

“So we know it is going to be a difficult game. It’s an FA Cup final, and a one-off game means that anybody can win. If we were going into a game as the underdogs against the perceived bigger team, we would feel we can win.

“We’ll make sure we do what we can to make sure that we can play well, which is what we’ve always done.”

West Ham, who are seventh in the WSL, have Gilly Flaherty and Jane Ross in their ranks.

Flaherty won the FA Cup for the seventh time last season when Chelsea lifted the trophy, and Scotland international Ross was with City when Cushing guided them to FA Cup glory in 2017.

City skipper Steph Houghton said: “We won’t take them for granted, definitely not.

“I respect West Ham for the journey they have been on this season and the players they have as part of their squad.

“For me as a captain and for the rest of the squad we have to make sure we’re on it and we have to go and give our best performance that we can.

“I’m feeling confident. I think we’ve played well this season. We probably don’t get the just rewards that we have worked so hard for this season.

“I’m very confident we can go into this final and as long as we go through the same process that we have done for every single game this season, I think we have a great chance of winning that trophy.”