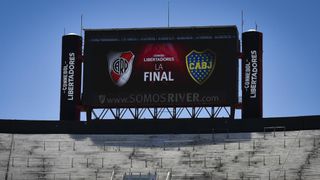 Dani Alves has vehemently opposed the decision to play the second leg of the Copa Libertadores final at the Santiago Bernabeu.

CONMEBOL opted to move the fixture to Madrid after the second leg twice had to be postponed, following attacks on the Boca Juniors team bus en route to River Plate's Monumental stadium.

The latest South American footballer to voice his discontent at the decision, Dani Alves posted a message on Instagram, in which he called the move a disgrace.

"For me, playing Boca-River outside of South America is the biggest disgrace I have ever seen and will see as a football player, as a South American and as someone who considers that this is a sport lived with feeling, passion and above all respect," he said.

"It seems to me that all these people, who have nothing to do with what happened, should not have to pay for a few fools. Maybe this was the only chance they had to see Boca-River in a final and now they can't because it's been moved to Europe.