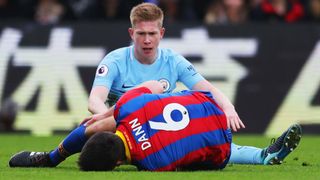 The Eagles duo, captain and vice-captain for the Premier League club respectively, both left the field on a stretcher after fouls on Manchester City's Kevin De Bruyne at Selhurst Park on Sunday.

Puncheon's rash lunge on the Belgium international prompted City manager Pep Guardiola to renew his calls for referees to protect players from dangerous tackles after the match.

But, while De Bruyne recovered to play a starring role in the Premier League leaders' 3-1 win over Watford on Wednesday, Palace boss Roy Hodgson was left counting the cost of a punishing dual blow that took some of the shine off a vital 2-1 comeback triumph over struggling Southampton.

"Both will be seeing specialists and having operations when the swelling goes down, and we won't see anything of those players for the rest of our season.

"It's going to be hard for them to be ready for the start of next season because it's a serious injury."

RH: Dann and Puncheon are both cruciate ligament injuries. They'll both see a specialist and likely undergo surgery once the swelling goes. We won't see them play again this season and may not be ready for the start of next. They're very serious injuries.January 2, 2018

Dann started 17 games for Palace this season and his absence may push Hodgson into the transfer market at centre-back, particularly with ex-Liverpool duo Martin Kelly and Mamadou Sakho nursing calf injuries.

Puncheon has been a more marginal figure since Hodgson replaced Frank de Boer at the helm in September and will appear at Guildford Magistrates Court on January 5 after being charged with assault and possession of an offensive weapon.