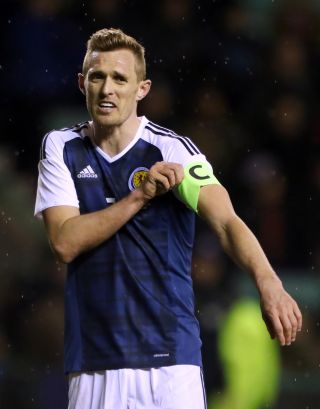 Former Scotland skipper Darren Fletcher has taken a pop at Alex McLeish’s astroturf absentees after the nightmare in Nursultan.

The Scots’ Euro 2020 qualifying campaign got off to the worst start imaginable as they slumped to a 3-0 defeat to Kazakhstan.

McLeish was without a number of key men – including star left-backs Andy Robertson and Kieran Tierney, who missed out with dental and groin injuries respectively.

But versatile Cardiff player Callum Paterson and Bournemouth winger Ryan Fraser also sat out the match after their club sides requested they were not risked on the Astana Arena’s artificial surface.

Steven Fletcher also decided against making the trip as he looks to “manage” knee and ankle complaints that kept him sidelined for eight months last year – but was fit enough to start and score in both of Sheffield Wednesday’s last two games.

The likes of Matt Ritchie, Robert Snodgrass and Tom Cairney have also dropped out of the international picture in recent months despite still starting for their clubs.

And that has angered Stoke midfielder Darren Fletcher, who believes they should all be playing through the pain barrier for their country.

The former Manchester United player, when asked about those opting not to play on the plastic pitch, told Radio 5 Live: “That was a frustration but if I’m perfectly honest I don’t completely buy into that.

“Maybe if you were being asked to play on it every week, but that was a one-off game for your country.

“Yeah it’s a slightly harder surface and it’s not ideal, but at the end of the day it’s not too dissimilar and for the sake of one game I’d like to have seen these players make themselves available if I’m perfectly honest.

“But it’s probably clubs getting involved. There is a lot of money involved in players getting injured so I’m sure there are a lot of complications in that matter.

“At the same time, though, if a player wants to play for his country then he makes himself available.

“I never had that concern because it was never something that was applied to me from a club manager. I’ve always made myself available for my country.

“So I find that one really difficult. At the same time if a player is being put under pressure by their club – and I’m not saying that’s the case – but if he is then it puts them in a very difficult position.

“But players should be desperate to represent their country. We need to qualify and we need our best players on the pitch at all times.”

Scotland found themselves 2-0 down within 10 minutes and conceded again early in the second period as they fell to one of the worst results in the country’s football history.

McLeish’s squad do have a safety net in the shape of a Nations League play-off to come next year if they fail to qualify through the traditional route.

And Fletcher urged the players not to panic.

He said: “We’ve got plenty of time to recover but I just hope it doesn’t have a knock-on effect where we feel we’re playing catch-up and put ourselves in a really difficult position.

“We need to pick ourselves up and I fully expect us to beat San Marino on Sunday. We can make up points in some of the other games, it’s about keeping belief. We don’t want to lambaste these lads after one game.

“They deserve criticism but give them a chance to move on.”