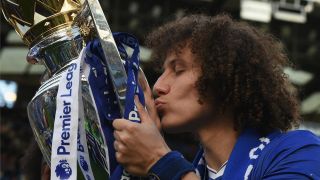 David Luiz has revealed he took a pay cut to leave Paris Saint-Germain and return to Chelsea for a second spell at the club.

Eyebrows were raised when Antonio Conte brought the Brazilian defender back to Stamford Bridge on transfer deadline day in August 2016.

But the 30-year-old thrived in the Italian's new look back three system, playing a key role as Chelsea romped to the Premier League title.

Luiz could claim the double in Saturday's FA Cup final against Arsenal, but the centre-back accepts it was a "risk" to go back to Chelsea after a period of domestic dominance in Ligue 1 with PSG.

"I don't always like the easy life," Luiz said. "That's why I took a risk and I'm very happy. It was the right decision."

"I love the risk. In your life if you don't take a risk you're not going to taste something new. Not just in your professional life, I think it's every day.

"I cut my salary to come back here. But it's OK. God has given me a lot so I'm very happy with this."

The trust Conte has placed in Luiz has been richly rewarded and the defender is keen to repay the faith of his manager.

"Conte is a great person, a great character and he's passionate - he loves football," Luiz added. "The day I arrived here we talked together and he tried to explain his philosophy to play football.

"He said to me: 'You are the player I want in my team and to improve my team.' And then I said to him: 'I'm going to work hard for you and for the team.' And that's it."

"I've been working hard a lot since the beginning of my career and to play 10 years consecutively in big clubs is not easy, and I try to give my best every season," Luiz continued.

"Last season was not a good season for Chelsea but this season, we have done great since the beginning – and not just because of me. Because of everybody. Because of the commitment, the desire, the mentality we put on the pitch every day. That's why we deserve it."