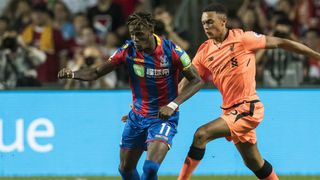 De Boer highlighted the former Manchester United attacker's skill, likening it to Neymar, who is reportedly the subject of a world-record offer from Paris Saint-Germain.

"He can make some half pass in between and he is away," said De Boer.

"That's a quality not many players have - to still [have] control at the highest speed. Neymar has it. If I have to compare with one it's Neymar."

"What he has in his skills I think he is a lot like, if we have to give an example, for me it's Neymar," De Boer added.

"He also has the quick feet and he's gone. Very skinny, so fast, every touch, every pass."

Named Palace's Player of the Season the past two campaigns, Zaha scored seven Premier League goals and assisted nine others in 2016-17.