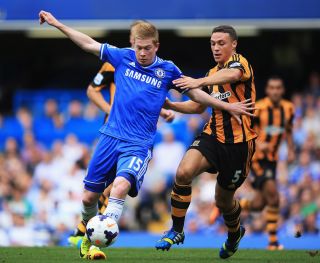 The 22-year-old winger spent last season on loan at Werder Bremen, and his impressive displays for the Bundesliga outfit - coupled with the level of competition for attacking places at his parent club - led many to believe he would again temporarily leave Stamford Bridge this term.

However, Chelsea boss Jose Mourinho decided to keep De Bruyne at the club, and rewarded him with starts in both their opening Premier League games against Hull City and Manchester United.

The Belgium international was left out of Chelsea’s last two matches with Steaua Bucharest and Norwich City though, with Mourinho citing his poor performance against Swindon Town in the League Cup and in training as the reasons for this decision.

Nevertheless, De Bruyne, who is currently away on international duty, has insisted he is happy at Stamford Bridge and has no problem with the Portuguese.

"I really don't worry … I chose to stay and I have no regrets," the former Racing Genk man told La Derniere Heure.

"Mourinho is the boss, he chooses who plays. We do not talk about it really."

De Bruyne went on to say he has no plans to seek a move away from Stamford Bridge in the next transfer window.

"I continue to fight hard. My chance will come. I'm really not concerned about finding a solution in January," he added.