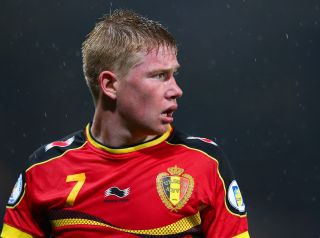 The Belgian did not travel when Jose Mourinho's men took on Steaua Bucharest in the UEFA Champions League at the beginning of the month, and was forced to spend his time training with the club's under-21 squad.

And, with the FIFA World Cup less than a year away, the 22-year-old midfielder is well aware of the need to get minutes on the pitch under his belt.

"I will work hard and hope that I get my chance. I have to show the coach my level," he told the Daily Star.

"I was disappointed just like the other players who didn't travel, but I wasn't the only player who wasn't there.

"He knows what I can do. I played a good 90 minutes [in Belgium's 1-1 draw with Wales on Tuesday] and showed everyone that I am fit. I can only do my best."

De Bruyne has not made a Premier League start for Chelsea since a goalless draw at Manchester United on August 26.