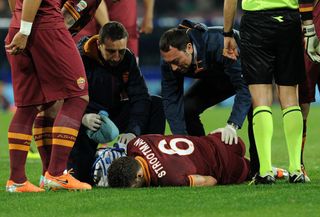 The 24-year-old was forced from the field just 13 minutes into Sunday's 1-0 Serie A setback at Napoli after initially attempting to play through the pain barrier, but it was later revealed he had suffered an anterior cruciate ligament injury in his knee.

The news comes as a particular blow to the Netherlands international as he is now likely to miss the World Cup in Brazil later this year.

Goalkeeper De Sanctis expressed disappointment that Strootman will not appear before a world audience at the showpiece event, but believes a lack of competitive action will give him the best chance to recover.

"There is sorrow, particularly for Kevin because he was at an important stage in his career and in the season for Roma. He also had the objective of having a great World Cup," he is quoted as saying at a function for Lotto.

"This was the greatest blow for him, but if one has to get injured in this way and stay out for so long, then there's no better time, considering that the season ends in 60 days and there will be three months without competitive games and he will have plenty of time in which to recover well."

De Sanctis was also asked whether Roma's recent struggles in front of goal are directly linked to the absence of captain Francesco Totti, who has missed the last four matches in all competitions with a gluteal injury.

Roma have drawn blanks in four of their past six matches in all competitions, and De Sanctis believes Totti's eventual return will boost their goal return for the remainder of the campaign.

He added: "Francesco will return and that is a positive. In attack he is capable of doing an important job and scoring, he can take responsibility with more ease and I am confident that between now and May 18 everything will run smoothly."

Roma currently occupy second place in Serie A, 14 points adrift of leaders Juventus and three ahead of Napoli in third, with Rudi Garcia's men possessing a game in hand over both sides.