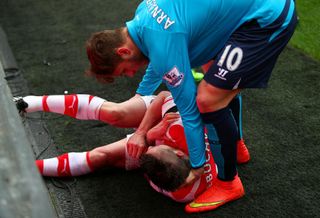 Debuchy was carried off on a stretcher just 13 minutes into Arsenal's 3-0 Premier League victory on Sunday after a slight push from Stoke forward Marko Arnautovic sent him crashing into the advertising hoardings behind David Ospina's goal.

And Arsenal boss Arsene Wenger confirmed that Debuchy sustained a dislocated shoulder in the incident and therefore faces another lengthy layoff.

Debuchy spent nearly three months out of action earlier in the season after undergoing ankle surgery.

"It's dislocated so will take a while," said the Frenchman. "He will have to see a specialist."

Arsenal's record signing - who had not played since October due to a knee problem - came on as a late substitute at the Emirates Stadium.

Wenger said that while Ozil is now ready to play, it will take the German up to three weeks to regain full match sharpness.

"He lacks match fitness but he's fit physically," he added.

"He'll be back fully in two to three weeks."

Arsenal were superb throughout Sunday's game, with Stoke goalkeeper Asmir Begovic making a number of fine saves to keep the score down to 3-0.

The pattern of the match was in stark contrast to the reverse fixture last month, when Stoke raced out of the blocks and went in at half-time three goals to the good.

This time around it was Arsenal who made all the early running, with Laurent Koscielny heading them in front after just six minutes before the outstanding Alexis Sanchez scored either side of the break.

And Wenger was thrilled with the way his team had learned their lesson from the Britannia Stadium.

"We missed the start of the game at Stoke and paid for it," he added.

"This time we put them on the back foot."