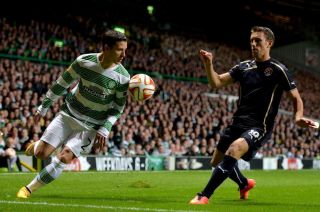 Bulgarian winger Tonev was sanctioned by the Scottish Football Association last month, having been found guilty of using "offensive, insulting and abusive language of a racist nature".

The charge related to an incident during Tonev's Celtic debut in September, when he was alleged to have racially abused Aberdeen defender Shay Logan.

However, Tonev has maintained his innocence and will find out whether his appeal has been successful next week.

A brief statement from the SFA on Wednesday read: "An Appellate Tribunal will convene on Thursday, 4th December 2014 to consider an appeal against the determination made and sanction imposed by a Judicial Panel Disciplinary Tribunal on 30th October 2014 relative to the case of Aleksandar Tonev (Celtic FC)."

Tonev has been available to play for Celtic since appealing his suspension on November 5, though he has not been selected by manager Ronny Deila.