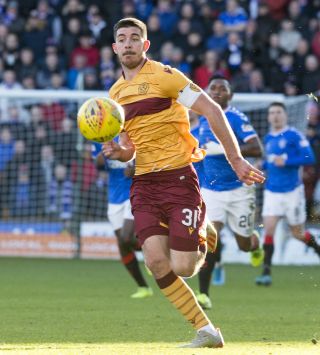 Motherwell defender Declan Gallagher feels his club and others need to start producing in Europe for the sake of Scottish football.

Celtic have been regulars in the group stages in recent years while Rangers have qualified two seasons in a row but it was Aberdeen 13 years ago who were the last club outside Glasgow to make it past the qualifiers.

Motherwell came close 10 years ago when they fell to Odense in the Europa League play-offs but the Scottish co-efficient tumbled in subsequent years following the financial collapse of Rangers, making the task even more difficult.

Gallagher and his men are looking to complete a Northern Ireland double when they face Coleraine at The Showgrounds on Thursday in the second qualifying round of the Europa League after dispatching Glentoran 5-1 at Fir Park in the opening round.

With Albanians Laci or Hapoel Beer-Sheva of Israel awaiting in the following round, Gallagher is determined to progress.

The Scotland international said; “It’s massive, not just for the club itself but massive for Scottish football as well. Celtic and Rangers are carrying a big burden to always get to Europe.

“I think it’s probably time that other clubs in this league start progressing and start showing that Scottish football is a good league.”

Motherwell’s first-round victory was more edgy than the scoreline suggests with the game opening up only after Glentoran had a man sent off and the home side got the breakthrough after the hour mark.

Coleraine’s victory over Maribor ensured Motherwell were seeded for this round and they then drew Oran Kearney’s side.

Gallagher said: “The gaffer has good knowledge of a few of their players, he has given us insight into how they might play and shape up. So it is good knowledge, and Trevor Carson knows a few of the boys as well. So we will be well prepared and we’ve been doing our homework.

“We watched clips of the Maribor game, they are a hard-working team, well-organised so we know it’s going to be a really tough test for us.”

Motherwell gave themselves a lift going into the game by sealing their first Scottish Premiership win of the season with a 1-0 victory over St Johnstone on Saturday but Gallagher had not been overly concerned about their early-season form.

“I didn’t think there were any panic stations just yet, we just weren’t getting that rub of the green,” he said.

“Hibs were flying high when we went to Easter Road and we probably played the best we have played this season and only got a point. Saturday was probably the worst we played and yet we got three points. That’s football for you.

“I didn’t think there was anything to panic about and now we have picked up those first three points I think we will kick on now.”