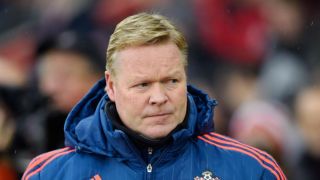 Ronald Koeman was left with a feeling of deja vu after his Southampton side were sent crashing out of the FA Cup by Crystal Palace in a 2-1 defeat on Saturday.

Oriol Romeu struck early in the second half of the third-round tie at St Mary's Stadium to cancel out Joel Ward's opener.

However, Wilfried Zaha struck in the 69th minute to send Palace, who beat Saints at the same ground in round four last season, into the hat for the next round.

Saints, who have now won just once in 10 matches, wasted several opportunities throughout the match, including Virgil van Dijk hitting the post late on, and manager Koeman is frustrated by the chances his side are wasting.

"It's a hard time because maybe it's the same story every week," Koeman told Southampton's official website.

"I can't say anything about the team work. We tried everything to make the 2-2. Maybe we are a little bit unlucky at the moment, but that's football.

"We had a lot of things against us and of course if you start well the game, even with a different system, you normally get the first goal.

"We had good moments and controlled the game. One big mistake in our ball possession and we're 1-0 down. That makes it difficult. But we had a good reaction in the first part of the second half."

Koeman also expressed disappointment that Southampton failed to kick on after finding the equaliser.

"What I have to criticise the players for is that we dropped back off, we didn't continue how we started and that gave them the confidence to come back," he added.

"They had one more shot on target and it's 2-1. We did everything after that - we created chances, some good goalkeeper work and two or three shots.

"Then you know it's the moment with a lot of things against us. We have to continue and show the spirit after the 2-1. That's the way to come back and to be luckier than in the last few weeks."