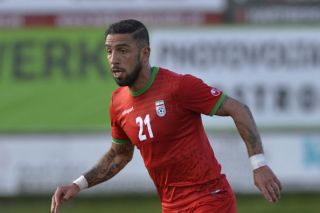 Queiroz has been linked with South Africa's vacant head-coaching position since Gordon Igesund was sacked on Monday with the Portuguese having led Bafana Bafana from 2000-02 but Dejagah believes Iran cannot afford to lose the 61-year-old.

The Fulham winger is expected to be a key player for Queiroz as the Portuguese coach leads Iran in Brazil and Dejagah wants to repay his coach with strong performances and a berth in the knockout stages.

"I hope Carlos stays with us and qualifying for the next stage (of the World Cup) can help that," Dejagah said.

"We will all benefit from his experience in the long-term."

Dejagah has started in two of Iran's three pre-tournament friendlies and, after five goals in 22 Premier League appearances for Fulham last season, he should start his country's World Cup opener versus Nigeria on June 16.

Iran have been also been pooled with Argentina and Bosnia and Herzegovina in Group F and Dejagah reckons the first game will be crucial for Queiroz's side.

"We have a good chance of reaching the next stage if we can beat Nigeria in our first game," the 27-year-old former Wolfsburg said.