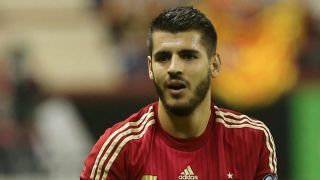 Spain head coach Vicente del Bosque has told Alvaro Morata he must produce more consistent performances if he is to become his country's main man in attack.

The European champions continue preparations for the defence of their title in France at Euro 2016 with a match against Italy – who they beat in the 2012 final – in Udine on Thursday.

Morata plays in Italy with Juventus and has the opportunity to stake his claim to be Spain's number nine against Antonio Conte's men, with Chelsea striker Diego Costa not in the squad due to injury.

Valencia star Paco Alcacer, Spain's top goalscorer in qualifying, and Athletic Bilbao veteran Aritz Aduriz are also in contention, but Del Bosque thinks Morata has everything required to make the spot his own – other than consistency.

"He has everything that is needed to be our centre-forward: physical strength, the ability to play in small or large spaces, he's strong at heading and he strikes the ball well," Del Bosque told Gazzetta dello Sport.

"But for some reason he has not yet found the necessary regularity and it's not the fault of his coach [Massimiliano Allegri]. The player has his own responsibility.

"I don't know if he lacks belief. He is a nice guy, he's not spoiled, he is humble and quiet and this is an important thing.

"He lacks consistency in games. We hope he finds it both with Juventus and with us. He needs to appear more during games."

Former Real Madrid striker Morata, 23, has only scored once in six Spain caps and just six times in 28 Serie A games for Juventus this season.