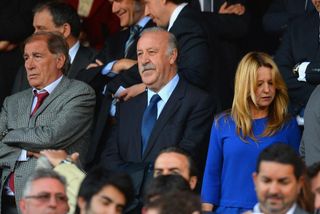 After Barcelona's Dani Alves had a banana thrown at him during a La Liga game at the weekend, the issue of racism has been under the spotlight - with players and fans alike rallying around the Brazilian by creating a social media, anti-racism campaign involving the fruit.

But Del Bosque said he did not believe racism was a widespread problem in the world game.

"In football there is no racism, absolutely not," Del Bosque said.

"It's not something that everyone is doing. I want to think that these are isolated incidents. In football, there is no racism."

"A good man leaves us, who went through his life doing his job well and never doing anything against anyone. He leaves us with half his life left to live. It's a tremendous loss," the Spaniard said.

"I join his wife, his children and his family's pain at this very difficult time.

"In addition to the personal experiences I've had with him, the other people I know who have had experiences with him are greatly appreciative of him.

"My relationship (with Vilanova) was always cordial. A very nice man who was always ready to work together. I deeply lament this loss."