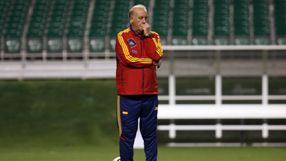 The world and European champions have such an embarrassment of riches available that it would be understandable if Del Bosque did not know his best starting eleven for their clash against the joint-Group I leaders.

The 61-year-old rang the changes for Friday's qualifier in Belarus, surprisingly playing midfielder Sergio Busquets at centre-back, and rewarding Santi Cazorla with a start after his impressive first two months at new club Arsenal.

The changed side swept to a 4-0 victory with the lively Pedro setting up the opener and going on to net a hat-trick, leaving Spain's all-time top scorer David Villa with a 15-minute cameo role off the substitutes' bench at the end. Fernando Torres was not used.

Andres Iniesta is likely to return from the outset, as is genuine centre back Raul Albiol, when Spain go in search of a 25th consecutive victory in major tournament qualifiers.

"We are lucky to have many players who can adapt," Barcelona forward Pedro told a news conference on Sunday.

"We are very clear about our philosophy and ideas, anyone can step in and do well, and it doesn't affect the national team's way of playing."

Spain, who beat France 2-0 in the quarter finals on the way to their Euro 2012 triumph, top Group I on goal difference from the visitors, both sides having won their opening two games.

With only one country earning direct qualification for Brazil 2014, the battle is on between the two group favourites to avoid having to qualify through the play-offs.

France geared up for the clash in the worst possible fashion by suffering their first defeat since Didier Deschamps took over from Laurent Blanc after Euro 2012, in a 1-0 friendly reverse against Japan at the Stade de France on Friday.

Once again, Real Madrid striker Karim Benzema, who has only netted 15 goals from 53 France appearances, failed to score.

The midfield could not control the game and the defence looked shaky, especially the full-backs.

With Abou Diaby and Rio Mavuba injured, Deschamps also has to make do without his first choice defensive midfielders.

To add to his woes, the in-form Paris Saint-Germain holding midfielder Clement Chantome pulled out after suffering a groin injury on Friday.

"It would be good to do [to Spain] what Japan did to us," said striker Olivier Giroud.

France were caught cold on a swift counter attack two minutes from time.

"We will have less chances against Spain but we will have to convert them," said winger Mathieu Valbuena.