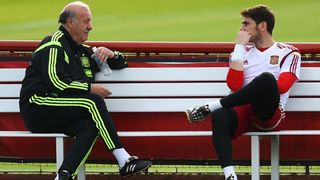 Outgoing Spain coach Vicente Del Bosque revealed he sent a message to every member of the squad that took part at Euro 2016 to notify them of his exit, except for Iker Casillas.

Del Bosque announced on Thursday he would be stepping down from his role as coach after seeing Spain bow out of the European Championship last-16 stage against Italy.

However, Del Bosque revealed his relationship with Casillas has deteriorated, with the goalkeeper unhappy at being used as a substitute behind new first-choice David De Gea.

"With his team-mates he has been fine, correct, but with the coaching staff it is so so," Del Bosque told El Larguero.

"That is why the only player I did not send a message to has been Casillas.

"He feels bad with me, but also with [physical trainer] Javier Minano or [assistant coach] Toni Grande.  With everyone else he has been fine. The anger has been with us."

"For sure he is hurting or displeased with me and I understand that. He thinks we have done the wrong thing," added Del Bosque, who said the decision to play De Gea in goals was a feeling his body had.

"But we have to be proud of a player who has 167 games with the national team. I don't believe three or four games will hurt his resume.

"Casillas hasn't disappointed me. I have a great appreciation for him. I have known him since he was nine years old."