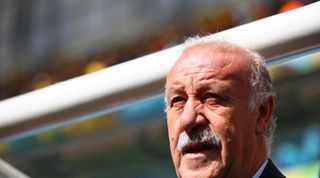 Spain endured a dismal campaign in Brazil, winning just one group game as the defence of their title fell at the first hurdle.

Del Bosque has included five uncapped players in his 23-man party for next week's friendly with France and the Euro 2016 qualifying opener against Macedonia on September 8, with Kiko Casilla, Daniel Carvajal, Mikel San Jose, Paco Alcacer and Raul Garcia all looking to make their first senior international appearance.

Marc Bartra and Ander Iturraspe are among the other inexperienced players in the squad, holding one cap each, while Real Madrid's Isco is also included.

Xabi Alonso and Xavi have retired since returning from Brazil, but the likes of Iker Casillas, Sergio Ramos and Andres Iniesta ensure the team has plenty of experience to call on.

"This is a squad for the present, but designed looking toward the future," said Del Bosque. "This is a special list given recent events.

"It comes after our poor showing at the World Cup and we have to look ahead."

Del Bosque has also included Chelsea striker Diego Costa, who was confirmed to have a "minor muscular injury" earlier this week, but there is no place for clubmate Fernando Torres.