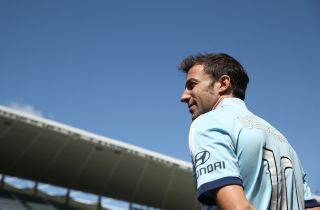 Manager Frank Farina last month appointed the legendary Italian as his skipper for the 2013-14 season, which gets under way on Friday when Sydney host Newcastle Jets at the Allianz Stadium.

Sydney finished just outside the play-offs in Del Piero's first term in the Australian top flight, but Juventus' all-time top goalscorer is determined to help the club improve on their seventh-placed finish this time around.

However, the 38-year-old is expecting a tough campaign as he believes that the general quality of the division has improved in the close-season.

"I am proud and it is a great honour for me to be the captain, and we are hoping for a better season than the last one and we hope to win a lot of games," Del Piero said.

"I think every single team has improved with new players and new structures. We heard before what the coaches said, everyone is focused on winning single games and our focus is too to win single games.

"Our focus is not too far, our target is the playoffs but step by step - and the first step for us is at home against Newcastle on Friday.

"The only thing we have to do is play well, with heart and with passion and hopefully win."

The Victory finished the 2012-13 regular season in third before losing out to eventual winners Central Coast Mariners in the play-off semi-finals.

And Australia international Thompson revealed that the lingering sense of disappointment - along with the prospect of a FIFA World Cup at the end of the campaign - is driving him on.

"This one (season) especially has a lot riding on it for not just the clubs and supporters, but the players too, because there is an opportunity to be part of a World Cup," the 34-year-old said.