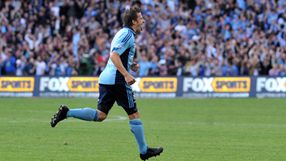 The 37-year-old former Juventus stalwart joined Australia's Sydney FC last month on a two-year contract the club said was the highest in Australian professional sport. Local media reported it was worth A$2 million a year.

"I'm not 100 percent, definitely," Del Piero told reporters after Sydney's training session on Wednesday. "But I'm feeling good because I'm training every day and this is important."

Del Piero, who had 19 seasons with the Serie A giants, made his debut for the two-times A-League champions in a 2-0 loss at the Wellington Phoenix, where he was cheekily taunted by the home fans with chants of: "Who are ya? Who are ya?" every time he touched the ball.

He scored his first goal a week later against former England international Emile Heskey's Newcastle Jets in a 3-2 loss and last Saturday scored the winner in Sydney's 1-0 victory over the Western Sydney Wanderers.

"After five weeks, I think I'm happy to be in this condition and hope to do my best in two or three weeks," Del Piero added as his side prepared for their clash with the Perth Glory at Sydney's Olympic Stadium on Sunday.

Del Piero also said he was still coming to grips with the physical nature of the Australian league.

"I have to do my best. I'm not big so I have to do something else but I have time in training to understand what is best for the team," said Del Piero, adding that he was getting to know his team-mates more day by day.

Administrators have positioned the striker as a talisman for the A-League in the hope he will raise the profile of the sport amongst fans, the media and businesses in a crowded sporting marketplace.

Sydney moved the clash against Perth to the 84,000 capacity Olympic Stadium in anticipation of a bumper crowd.

And while off the field he may be attracting special attention, the striker said he was definitely not receiving it on the pitch.

"Absolutely not," Del Piero said when asked it he was being favoured by referees because of his stature within the game. "For sure, no. Unfortunately, not."