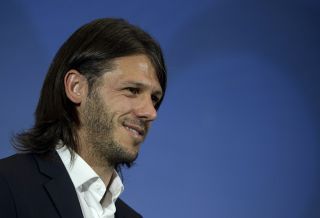 Demichelis (knee) has yet to play for City since he joined from Malaga in the off-season, while Rodwell (hamstring) has appeared for just 90 minutes in his club's trip to Stoke.

But both players believe they can play a part in City's match away to West Ham on Saturday after taking on Rochdale in their club's elite development squad.

Demichelis played the first half and believes he will make his debut against West Ham with City captain Vincent Kompany out with a quadriceps injury.

"It was difficult at the beginning (at City) with the injury but that allowed me to meet everybody at the club and feel confident and comfortable with everybody," the Argentine defender said.

"So it's fantastic now and I'm looking forward to my debut."

Rodwell is also convinced he is ready to step up into the English Premier League, despite his lack of match practice.

"I've not trained too much, that's why I played tonight.

Demichelis played as a defensive midfielder on Wednesday, trying to be as involved as possible as he tried to prove his fitness.

"I've played in this position many times before and the manager knew that," Pellegrini said.

"Obviously it was good for me to play there and get a lot of contact with the ball so it all worked out well and was good."