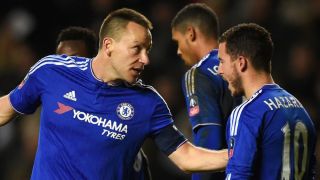 The veteran defender, who announced he will be leaving the club at the end of the season, played the full match as Oscar's hat-trick and one apiece from Bertrand Traore and Hazard set up a fifth-round meeting with Manchester City.

Hazard caused persistent problems for a beleaguered Dons backline and was given the chance to score a first goal this season for Chelsea at the 29th time of asking when home goalscorer Darren Potter brought him down in the area.

The Belgium international slotted home from 12 yards and celebrated wildly in front of the travelling fans.

"It's great for Eden to get off the mark, he's just come back from injury and now he can kick on," said Terry, who will call time on his Stamford Bridge career 18 years after making his Chelsea debut.

"It's good at the moment, we are playing well. It would nice to be on a cup run, you want to go all the way once you're in it.

"The majority of the squad know what the FA Cup is about."

The former England defender added to BBC Sport: "We had to come out of the blocks and we did, it could have been three or four early on."