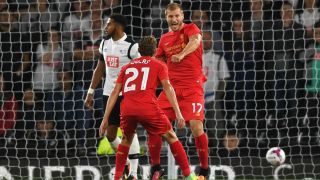 In-form Liverpool eased into the fourth round of the EFL Cup with a comprehensive 3-0 victory over Derby County at the iPro Stadium on Tuesday.

Philippe Coutinho scored one goal and assisted the other two as Jurgen Klopp's much-changed side crushed their Championship opponents, in the process extending their unbeaten run in all competitions to five matches.

Ragnar Klavan grabbed Liverpool's opener, the defender capitalising on a defensive error by Derby's Richard Keogh to find the net in the 24th minute.

Liverpool then hit their hosts with a quick-fire double at the start of the second half to put the contest to bed, Coutinho slotting home a one-on-one opportunity before setting up Divock Origi to do likewise from a tight angle.

Having brushed aside Burton Albion in the last round, Klopp's side have now managed eight goals without reply in the competition, raising hopes last year's beaten finalists could be set for a return to Wembley.

The German shuffled his pack for the trip to the east Midlands, handing full debuts to goalkeeper Loris Karius and midfielder Marko Grujic.

Yet despite making seven alterations to the XI that started the 2-1 win over Chelsea last time out, Liverpool’s new-look line-up were quickly into their stride.

Jordan Henderson and Roberto Firmino both fired long-range shots just over before an unlikely source rewarded the visitors' dominance with an opening goal.

Keogh's fluffed clearance from a Coutinho corner allowed Klavan to turn the ball in at the back post, with his left-footed effort finding the net via a deflection off Cyrus Christie.

Derby goalkeeper Jonathan Mitchell tipped over a Coutinho free-kick to keep the deficit down to one at the break, although he was unable to deny the Brazilian from scoring five minutes after the interval.

Coutinho played a one-two with compatriot Firmino, whose wonderfully weighted return ball allowed his team-mate to slot beyond Mitchell without breaking stride.

The tie was put beyond Derby four minutes later, Coutinho this time the provider as his ball down the right channel allowed Origi to hammer the ball into the roof of the net.

With such a healthy lead, Klopp had the luxury of withdrawing captain Henderson and star man Coutinho ahead of Saturday's league game against Hull City at Anfield.

Danny Ings was given the chance to make his first appearance of the season off the bench, while there was a debut for another substitute, youngster Ovie Ejaria.

Karius did get a reprieve when his failure to deal with a corner saw Keogh head just over, although it was a rare moment of concern on a night that saw Liverpool in cruise control.