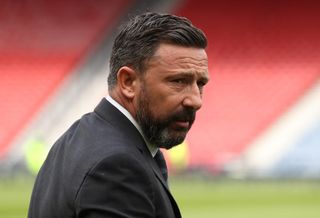 Derek McInnes is confident his Aberdeen team know exactly what a cup run means to the club as they look to reach their ninth semi-final of his tenure.

The Dons showed the never-say-die spirit needed for a good cup campaign when they twice came from behind to win at Kilmarnock in the last round – triumphing 4-3 despite going behind in the 116th minute.

McInnes won the League Cup in 2014 in his first season and has since suffered three Hampden final defeats against Celtic and he knows his players share his determination to claim the club’s first William Hill Scottish Cup triumph for 30 years.

Ahead of Saturday night’s trip to Paisley to face St Mirren, McInnes said: “We are delighted we have got this opportunity.

“The last game against Kilmarnock could have gone either way but the determination, strength and motivation of the team was clear.

“Cup games are always pressure games. This could be my first year as manager. I knew the importance of cups to Aberdeen because we knew we weren’t in the position to compete for leagues.

“We know Aberdeen supporters had seen other teams win cups and said: ‘Why not us?’

“We have been in more finals and done better than any other team outwith Celtic in the past seven years.

“The standard has been set. Although we have only won one trophy, we have put ourselves forward to semi-finals and finals time and time again.

“There is the same sort of pressure to deliver and we will do our utmost to show that, as we did in the last round.

“Everybody loves a cup run and we want to do all we can. I think the players showed in the last round against Kilmarnock exactly how important it is to them and it’s important we respond in the right manner on Saturday.”

The Dons have not scored in their previous two trips to Paisley this season, going down 1-0 early in the season and drawing there last month.

“Our record there this season hasn’t been good enough,” McInnes said. “We have never had it easy in Paisley but had found ways to win.

“It’s important we carry more of a threat than the last time, which I think my team has been showing of late.”