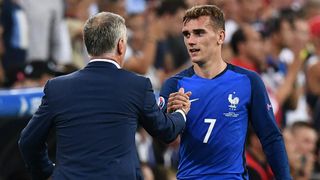 Euro 2016's top goalscorer took his tally to six goals after France defeated world champions Germany at a major tournament for the first time since 1958.

Asked about Griezmann's exploits, Deschamps said: "He's a great player and he proved that tonight, he works very hard, along with Olivier Giroud from a defensive perspective he made us a very compact unit.

"He has this speed and technical ability, he had a few chances tonight.

"He's a very important player just as he has been with Atletico Madrid throughout the season."

Griezmann's six goals at a single European Championship is bettered only by countryman Michel Platini's nine-goal haul at Euro 1984, while the 25-year-old has now scored as many goals for France at the Euros as Thierry Henry (six).