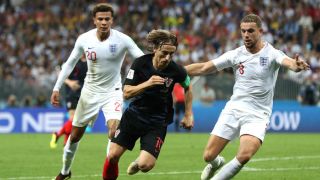 France boss Didier Deschamps has rubbished the suggestion it will be easier to defend against Luka Modric than Lionel Messi or Eden Hazard as the Croatia star is "less mobile".

Modric's form at the World Cup has seen him tipped to win the Golden Ball as the tournament's best player and challenge for the Ballon d'Or later this year.

Deschamps sees no reason why France would have an easier time against the Real Madrid star in Sunday's final, simply because they have already coped with Hazard's Belgium and Messi's Argentina in the knockout phase.

"I'm sorry, but you probably didn't see the same Modric as me if you think he is not mobile," he told a news conference.

"He can play in the centre, not especially, but of course he has technical qualities that are matched on the other side by [Ivan] Rakitic and his playing intelligence is huge, so he has a great influence on his team.

"He's not on the same register as Messi and Hazard as he is not as individual. He's a midfielder, an attacking midfielder, but Hazard and Messi are proper forwards."

Deschamps, a World Cup-winner in 1998 on home soil, coached his side to the final of Euro 2016 only for Portugal to break hearts in Paris with a 1-0 win.

The 49-year-old does not think memories of that defeat have had a huge impact on his World Cup squad, given only nine players in his current set-up were part of his plans two years ago.

However, he does hope those players will use the memory of that loss to strive for a more positive outcome at Luzhniki Stadium.

"The group is different to the group we had two years ago, because 14 players were not there two years ago," Deschamps added. "Those 14 new players have discovered what a great competition there is in Russia, so their experience is of course more limited.

"It's true Croatia have strong club experience because the players have reached a level of maturity and have been together a while, but whatever the match we've faced in this World Cup, we've always been facing opponents with more experience, more matches than us, it's obvious as I have a young team.