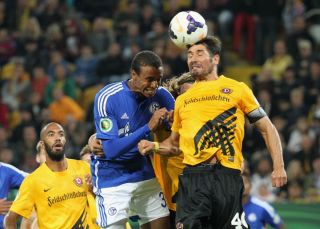 Third-tier Dresden missed the 2013-14 DFB-Pokal campaign for persistent crowd trouble, which came to a head when their supporters set off flares and caused damaged in a second-round clash against Hannover the season prior.

But Dresden produced one of the shocks of the round thanks to goals from Justin Eilers and Nils Teixeira on home soil at the Glucksgas Stadion.

Schalke - third in the Bundesliga last season - were overwhelming favourites heading into the match but they soon found themselves trailing after Felipe Santana conceded a 24th-minute penalty.

The Brazilian defender was punished for a mistimed challenge on Luca Durholtz and Eilers stepped up to convert the spot-kick.

It got worse for the visitors just four minutes into the second half as defender Teixeira doubled Dresden's advantage.

Joel Matip's attempted clearance fell to the feet of Teixeira, who volleyed low into the bottom corner.

Schalke did pull a goal back through Matip with 12 minutes remaining but it was not enough as Jens Keller's men joined fellow top-flight clubs Mainz, Stuttgart, Augsburg and Paderborn in making first-round exits.

It was a different story for Hamburg, who progressed to the next round, albeit on penalties against Energie Cottbus at the Stadion der Freundschaft.

Hamburg emerged 4-1 winners in the shoot-out after scores were locked at 2-2 at the end of extra time.

Cottbus, who were relegated to 3.Bundesliga last season, hit the front courtesy of Manuel Zeitz's 10th-minute penalty but visiting Hamburg were back on level terms with 20 minutes remaining, when Heiko Westermann headed home the equaliser.

That forced extra time and both teams exchanged goals with Rafael van der Vaart's 96th-minute free-kick putting Hamburg ahead, only for Sven Michel to hit back nine minutes later as penalties beckoned.

Cottbus had no answer in the shootout, missing two of their three attempts as Hamburg converted their first four to book a spot in the second round.

In other results on Monday, Heidenheim were 2-1 winners over 2.Bundesliga rivals Union Berlin.

Fourth-tier side Kickers Offenbach stunned Ingolstadt, who play in the second division, 4-2 on penalties following their 0-0 draw at the end of 120 minutes.