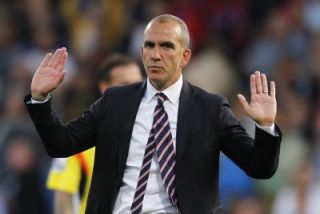 The Italian was sacked in September when Sunderland were rooted to the bottom of the Premier League table, but he insists that his coaching credentials were clearly demonstrated at the end of the previous campaign.

Di Canio was called upon to steer Sunderland away from relegation when he was appointed in March 2013 and he duly delivered, ending the club's nine-match winless run in the top flight with a memorable 3-0 win at bitter rivals Newcastle United on the way to a 17th-place finish.

"I am ready to return," Di Canio told the BBC.

"Five games cannot cancel what I did in the seven games before then, when I saved the club.

"Football is my breath. The Premier League is my aim, of course. Every manager thinks they are ready for the top, top level but I do not only think about the top.

"The top for me is the place where I can train and work in my way."

His reign at the Stadium of Light was dogged by reports of disharmony in the dressing room and Phil Bardsley has since described morale as "beyond dead" when Di Canio was in charge.

But the 45-year-old, who guided Swindon Town to promotion from League Two in 2012, played down those claims.

"If you read what those players said when I took charge last year, they praised me," he added.

"In some way, they blamed the previous manager but there was no chaos about that at the time.

"It is not an issue for me. I was sacked like 100 managers in life - but when it happened to me, there is always said to be a problem, but there was not a problem."