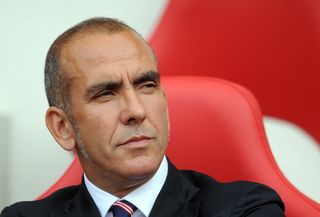 Di Canio’s side took an early lead at St Mary’s Stadium as Emanuele Giaccherini headed home a Sebastian Larsson corner in the third minute of play.

Sunderland were on the back foot from that point onwards though, as Rickie Lambert, Adam Lallana and Jay Rodriguez continually threatened Keiren Westwood’s goal.

And the Italian boss was happy with his backline, despite Jose Fonte’s 88th-minute header, as he feels Southampton are one of the best attacking forces in the Premier League.

"We had to defend approximately the whole game like Fulham did against us last week," Di Canio told reporters after the game.

"The defenders have done an amazing job playing against Lambert, Rodriguez, Lallana, (Gaston) Ramirez and then (Pablo) Osvaldo.

"This side are one of the best in the league up front. It is difficult to find another team who play this sort of football and have five quality forwards.

"Manchester United have (Robin) Van Persie, (Wayne) Rooney and (Danny) Welbeck but not many others.

"My back four have done a very good job at the end of the day."