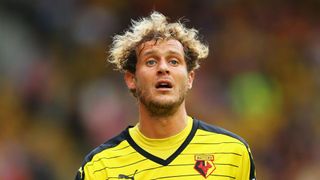 Guangzhou Evergrande Taobao striker Alessandro Diamanti's season-long loan at Watford has been cut short, with the Italian moving to Atalanta on a temporary basis for the remainder of the campaign on Wednesday.

The 32-year-old moved to China from Bologna in February 2014 but spent the latter half of last season at Fiorentina in Serie A before moving to Watford in August.

Diamanti struggled for fitness during his time at Vicarage Road and made just three substitute appearances during Watford's first season back in the Premier League.

The former Italy international returns to Serie A with Atalanta 11th in the league and on a run of four consecutive defeats.

Diamanti is set to go into Edoardo Reja's squad for the visit of third-place Inter on Saturday.

An Atalanta statement read: "Diamanti, who will wear shirt number 23, will reach the Sportivo Bortolotti Centre tomorrow and will be available to Mr Reja in the afternoon."