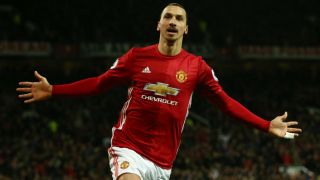 Zlatan Ibrahimovic has vowed to take his trophy-winning "DNA" to LA Galaxy, insisting he will be the "same Zlatan" following his move to the MLS franchise.

The 36-year-old completed his switch to Galaxy on Thursday, just 24 hours after his release from Manchester United.

Although MLS is a far cry from the competition of Europe's top leagues, Ibrahimovic, who has won league titles in the Netherlands, Italy, Spain and France, retains the same determination to add to his incredible trophy haul with the United States' most successful club.

"I want to accomplish as much as possible," he said in his first interview with the club's official website. "Wherever I have been, I've won. I'm coming with this objective. I come to win, I want to win.

"I think it's in my DNA that I have won my trophies - there's no luck, no special moment, it's just me. I bring this with me for the next challenge. It's a different place, but the same Zlatan.

"I decided to sign with Galaxy because I think it's the right place for me. I have a lot to give, I can help them a lot, and they are the best team in the US.

"There were no doubts. I have a lot of expectations, I put pressure on myself, I demand a lot in my game. I think I have a lot to bring and to give with that experience that I have.

Ibrahimovic has made only seven appearances since the start of the Premier League season, his United career having been derailed by a knee ligament injury suffered in April, but he dismissed any possible lingering concerns over his fitness as he looks to help Galaxy bounce back from a dismal 2017.

"I feel good," he said. "I'm training very hard. I haven't played games in a while and that is what I miss now. I need to play games to get that rhythm.

"The more I play, the better it will be. I'm just excited and looking forward to the games.

Galaxy head coach Sigi Schmid said: "Adding one of the finest goalscorers in this sport's history to our roster will tremendously help our club in the hunt for a sixth MLS Cup."