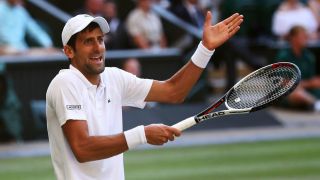 Normally one of the centrepieces of Britain's sporting summer, Wimbledon has been forced to compete for the public's attention with England's run to the World Cup semi-finals, and even three-time champion Novak Djokovic was not immune to the football fever that has swept through SW19.

Djokovic, whose Serbia side were eliminated in the group stage in Russia, came from a set down to defeat home hope Kyle Edmund in four sets on Saturday, and later complained of receiving unfair treatment at the hands of a patriotic Centre Court crowd.

Speaking to the BBC after advancing to a last-16 match against Karen Khachanov, Djokovic acknowledged the impact of England's march into the knockout stages and their 2-0 quarter-final victory over Sweden.

"It's quite a big event, of course everybody follows football. Football is the most popular sport on the planet. England got to the semi-finals so we could not miss that. It was on the TVs all over when we were in the warm-up area.

"I was glad that everybody was smiling. All the volunteers, all the people who were working, everybody was quite tense with 15 minutes to go and then I could feel relief."

Edmund's coach Mark Hilton had suggested the British number one might benefit from avoiding the emotionally draining experience of watching Gareth Southgate's side attempt to reach the last four.

But the 21st seed proved unable to resist the temptation, particularly given another of his coaches, Fredrik Rosengren, is Swedish.

"No that didn't happen, I watched," he said of the proposed television ban.

"The first goal I didn't actually see, I was getting my food, we were trying to stream it and it just wasn't happening. So we went downstairs to the physio rooms to get warmed up and keep an eye on it.

"[Dele] Alli scored the header, me and Hilts [Hilton] my coach were obviously loving it, Fidde [Rosengren] wasn't loving it. But he said, 'Oh, [England were] too good'.

American Serena Williams, the favourite to win the women's singles crown, also remarked on the mood in the capital, writing on Twitter: "I've spent a lot of summer weekends in London in my life but something feels different about this one!", in a message accompanied by three lion emojis.

I've spent a lot of summer weekends in London in my life but something feels different about this one!July 7, 2018

And the silver lining for the eliminated Edmund is the opportunity to watch England's semi-final showdown with Croatia as a fan on Wednesday.

"That's what everyone says, it's coming home," he said of the team's chances.

"The guys have done it in terms of reaching the semis and producing when it matters so all credit to them and the manager.

"The country's behind them and I don't think anyone is going to work now. They're all going to be talking about it. That's what you want."