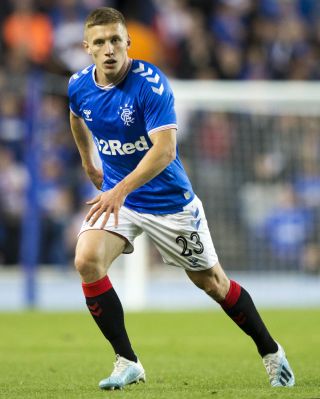 New Hibernian midfielder Greg Docherty was delighted to end his long wait for first-team action after making his debut in Saturday’s 2-2 draw with St Mirren.

Docherty joined on loan from Rangers on Friday as one of three deadline day signings by head coach Jack Ross.

The 23-year-old replaced Joe Newell in the 52nd minute and featured in his first game since last August’s Betfred Cup victory over East Fife for his parent club.

Hibs striker Flo Kamberi headed in the opposite direction as part of the deal, while Ross also handed debuts to Marc McNulty and Paul McGinn at the weekend as the hosts came back from two goals down to rescue a point.

Former Scotland under-21 international Docherty, who spent last season on loan at Shrewsbury, was just relieved to be back involved on a Saturday afternoon.

He said: “I missed that. That’s my first first-team game since August. I can’t believe it has been that long but I felt good.

“I woke up this morning with that buzz again, and it was nice to get on the pitch. I heard a few weeks before deadline day that something could happen. But I didn’t know if I would be staying in Scotland or going down south again.

“My name was being thrown about everywhere but I spoke to the manager and got the green light. And once I spoke to Hibs I was itching to get it done.

“If you’d said Hibs to me at the start of the window this would have been in my thought process. It’s a great backroom team, a great structure and a great dressing room. This is a good platform for me to get games and I think I can strengthen this team.”

Docherty watched on the from the bench as all goals from the draw were shared in an absorbing first half. Conor McCarthy and Tony Andreu had the visitors in a commanding lead after 18 minutes. Scott Allan and Christian Doidge, netting his 15th of the campaign, ensured the spoils were shared.

He said: “There is a good positive vibe around the place, we feel as if we’re in a good place and the January window has been brilliant for us.

“I think we’re in a stronger position coming out of the window than what we were going in and that’s the important thing.”