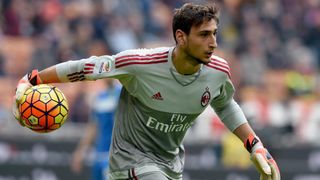 Gianluigi Buffon has voiced his admiration for AC Milan youngster Gianluigi Donnarumma and says the goalkeeper has a bright future ahead of him.

Donnarumma has become Milan's first-choice this campaign, displacing Diego Lopez as the Rossoneri's No.1, and has been described as Buffon's successor in the Italy team following his rise to prominence.

Buffon is not only impressed with the 16-year-old's technical skills and impressive physique, but has also hailed his decision making and composure.

"Donnarumma is doing great things as he hasn't shown any fear in taking on a stadium like San Siro, despite playing for a big team like Milan," the Juventus goalkeeper told La Gazzetta dello Sport.

"Along with showing great personality, he has great skills technically and physically.

"However, the thing I like most is that we are talking about a youngster who is doing all the right things, which is key in a career.

"The media has also done a good job and they haven't put too much pressure on him. I see measured statements, which is what should be done with such a young player."

Donnarumma has made 12 Serie A appearances since making his debut in the 2-1 win over Sassuolo back in September, keeping four clean sheets in the process.