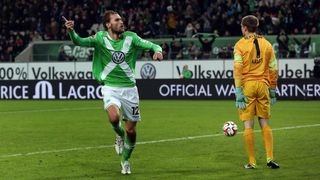 Dost struck twice at the Volkswagen Arena to see off Hertha with Julian Schieber hitting the back of the net between the Dutchman's two goals.

It took Dost just nine minutes to open the scoring, side-footing the ball into the bottom corner after Andre Schurrle nodded a cross into his path.

But Dost notched the winner with 16 minutes remaining, converting on the rebound after Luiz Gustavo's 25-yard strike came back off the post.

The 25-year-old conceded the role luck was playing in his scoring streak, explaining that everything just seemed to be going his way.

"It happens sometimes that when you're on a run, the ball just always seems to arrive where you are. It's a quality too but there's also a bit of luck involved," Dost said, according to the Bundesliga's website.

Wolfsburg stretched their unbeaten run to 12 competitive fixtures, with Dieter Hecking's men staying within eight points of Bundesliga leaders Bayern Munich, but Dost claimed his team cannot afford too many performances like the one they produced against Hertha.

"It wasn't pretty football today. We took the lead and started off well, but then we threw our advantage away too easily," he said.

"We need to play better than today really. I still believed we could win and eventually made it 2-1."