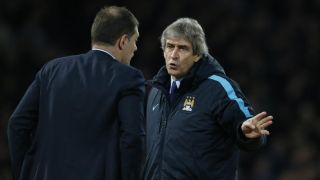 Manchester City boss Manuel Pellegrini felt a draw at West Ham was "not bad", but admits it was not the result he wanted.

Two goals from Sergio Aguero, the second of which arrived in the 81st minute, gave the visitors a dramatic 2-2 draw at Upton Park on Saturday after Enner Valencia had netted twice for the hosts.

City have now tasted victory in only one of their last eight away Premier League games and trail surprise leaders Leicester City by three points.

Pellegrini was impressed by the quality on show from opponents West Ham, but felt City edged the match in terms of creating key goalscoring chances.

"If you analyse the whole game I think that we had two or three clear chances to score. We hit the post twice and had one clear chance at the end.

"It was a difficult game. I was not happy the way we conceded the second goal. We lost with a throw-in after Fabian Delph had shot to the post it comes in the next play and that brought the goal.

"Until the last minute I don't think I saw Joe [Hart] have to really work very hard. I thought we played near their box, but it was a close game for both teams and a good game for both sets of fans. It was end-to-end because both teams play in an attacking way.

"West Ham have very difficult players up front so you have to be very concentrated to try and stop them. With our team the same thing, I think we always try to arrive and that makes a game more open.

"We always try to play with attacking players and creative players. I think it was important when we were losing 2-1 to put on Kelechi [Iheanacho] because he plays very well with Kun [Aguero] and that allows us to score the second goal."

City now turn their attention to cup business, with the second leg of their League Cup semi-final tie against Everton on Wednesday preceding their FA Cup fourth-round game at Aston Villa next Saturday.