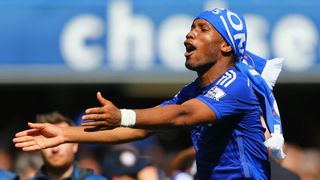 Didier Drogba offered no assurances over his future after Chelsea clinched the Premier League title with a 1-0 win over Crystal Palace.

A 45th-minute goal from Eden Hazard on Sunday was enough to seal a victory that saw Chelsea claim the Premier League for a fourth time.

Drogba, who rejoined the club for a second stint in July 2014, has been involved in each of those successes.

Yet the 37-year-old has had to be content with a limited role this term, in stark contrast to Chelsea's previous title-winning campaign, in 2009-10, when the Ivorian scored 37 goals in all competitions.

Drogba told Sky Sports: "This one is sweet. I am happy to be part of this, but Chelsea will always be bigger than me.

"What now? A good rest, a good celebration and I will see."

Attacking midfielder Eden Hazard has been the star of this season for Chelsea, with the Belgium international winning the PFA Player of the Year award.

Jose Mourinho's side have been labelled as 'boring' by rival fans in recent weeks, but Hazard said: "We deserve to be champions. We are 13 points in front, we won the [League] Cup, now we won the league and everyone is happy.

"He [Mourinho] lets me play, I can play my best football on pitch and that is most important. The team needs a player like me, Willian, Diego [Costa]. We are here to score. "

The title marks a first league success in England for former Arsenal midfielder Cesc Fabregas, who commented: "I waited a very long time for this. [It is] very relieving, [we've] been fighting for this and I am very proud."