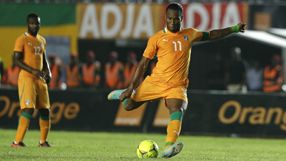 The trouble in Dakar overshadowed qualification for Ghana, Mali, Morocco, Nigeria, Tunisia and holders Zambia who are all through to the finals in South Africa in January.

Drogba's latest talismanic performance proved too much for the Senegal fans who invaded the pitch, threw objects and lit small fires in the packed stands after their team went 2-0 down and 6-2 behind on aggregate in the final round tie.

Police were forced to clear the away supporters to safety, leading many of them to the middle of the pitch, and then sent a vehicle on to the field to evacuate the match officials before the game was called off about 14 minutes from full-time.

It is likely the Ivorians will be awarded the tie but there was no official confirmation on Saturday from the governing Confederation of African Football whose Cairo office was closed.

Striker Drogba's free-kick just after half-time extended the Ivorians' two-goal lead from the first leg and then converted a 71st minute penalty which sparked the violence.

The riot, which highlighted the explosive nature of the African game, put a dampener on a day of excitement on the pitch across the continent with Zambia needing a penalty shootout win to ensure they can defend their crown at next year's finals.

It took 20 penalty kicks before the Zambians edged Uganda 9-8 after they drew 1-1 on aggregate having lost the second leg of their final round qualifier 1-0 in Kampala.

Tunisia also scraped into the finals on away goals after being held 0-0 by modest Sierra Leone at home in Monastir, following a 2-2 draw in last month's first leg.

Morocco's Youssef Al Arabi scored five minutes from time, after earlier missing two gilt-edged chances, to give Morocco the decisive third goal in a 4-0 win over Mozambique in Marrakesh where they overcame a 2-0 first-leg deficit.

But the tie was clouded in controversy with the turnaround coming just after the hour mark when Morocco were awarded a soft penalty that led to Mozambique captain Miro being sent off.

Ghana were first to qualify by beating Malawi 1-0 away in Lilongwe for a 3-0 aggregate triumph thanks to Afriyie Acquah's debut goal. Mali went on the rampage with a 4-1 win over Botswana on the road in Lobatse to advance 7-1 on aggregate.

They were outdone by Nigeria, who thumped Liberia 6-1 in Calabar with the Chelsea pair Victor Moses (2) and John Obi Mikel (penalty) on the scoresheet. Nigeria scored inside a minute and swamped the visitors for an 8-3 aggregate triumph.