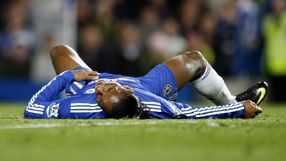 Chelsea striker Didier Drogba, who scored the only goal in Wednesday's Champions League semi-final first leg victory over Barcelona, will miss his side's trip to Arsenal on Saturday with a knee injury.

Sixth-placed Chelsea will also be without centre-back David Luiz, who injured his hamstring in Sunday's FA Cup semi-final win over Tottenham Hotspur, and the suspended Branislav Ivanovic.

Interim manager Roberto do Matteo is hoping the curly-haired Luiz will be fit again by the end of the month.

Third-placed Arsenal, five points clear of Spurs and Newcastle, will be without Spanish midfielder Mikel Arteta for the rest of the season, manager Arsene Wenger confirmed on Friday.

Arteta damaged ligaments in his ankle and foot during the 2-1 defeat to Wigan Athletic on Monday.

Newcastle United have more players in the treatment room than any other Premier League team with up to 11 of their squad nursing knocks ahead of Saturday's home match against Stoke City.

James Perch, Danny Guthrie and Leon Best are all due to have late fitness tests before the match while Cheick Tiote (hamstring) and Fabio Coloccini, who also has a hamstring injury, are hoping to be fit.

Manager Alan Pardew has said that their current form means they are now serious candidates for a Champions League spot next season. Newcastle are fifth, level on points with fourth-placed Tottenham Hotspur and two points ahead of Chelsea.

Tottenham Hotspur, whose form has nosedived in recent weeks and whose place in the top four is now under serious threat from Newcastle and Chelsea, will be without central defender Younes Kaboul for Saturday's match at Queens Park Rangers.

Kaboul has a knee injury and Spurs will also be without the services of Niko Kranjcar (knee) for the rest of the season.

Fourth-from-bottom Queens Park Rangers will have striker Djibril Cisse back for the visit of Tottenham after he missed four games following a red card against Sunderland.

"It's been a long time and I'm looking forward to playing again," the former Liverpool player told the club's website.

Wigan Athletic manager Roberto Martinez has warned his side they are not safe yet despite wins against Liverpool, Manchester United and Arsenal in recent weeks.

Hugo Rodallega and Albert Crusat miss the trip to Fulham on Saturday when victory would leave Wigan within touching distance of avoiding relegation.

"We haven't achieved anything yet," Martinez, whose side are five points above the relegation zone, said. "There are 12 points still to play for an every team in our area of the table are going to pick up points over the coming weeks."