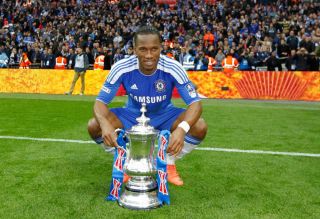 And the 36-year-old is keen to extend his FA Cup fairytale this season, with Chelsea starting their road to Wembley in the third round when Watford make the short trip to Stamford Bridge on Sunday.

With Chelsea joint top of the Premier League, through to the League Cup semi-finals and into the last 16 of the UEFA Champions League, Jose Mourinho's men are chasing a historic quadruple.

"We have to do it together. We want to achieve something great and I think that is why we have played well this season," Drogba told the official Chelsea website.

"I hope at the end of it we will be able to say together we won this trophy, this trophy and this trophy.

"I know the feeling the fans have when we get to a final.

"We share the same feeling. It would be nice to go back to Wembley together again and make history."

Drogba has scored six goals in all competitions in 2014-15 since returning to Chelsea.