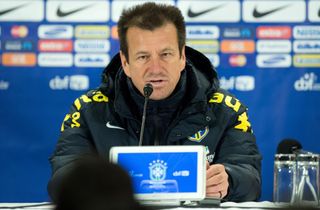 Paris Saint-Germain centre-back Silva has returned to the squad after injury, but he remains without the captaincy.

Neymar has led Brazil since Dunga took over after the World Cup, and the coach said the Barcelona attacker had the characteristics of a leader.

"Each player has their own characteristics but a team's preparation begins in technical, physical and tactical aspects. Those ingredients will give you a mental support," Dunga told a news conference.

"The more we feel safe in those elements, the more we'll have confidence.

"The decision of who we call captain depends on each player's characteristics, there's some players that feel comfortable in their first day here and other ones take a little longer.

"There's some others that receive a special attention in their clubs but in the national team this attention is shared with the others.

"There's also players that only receive compliments in their clubs and when they arrive the Brazilian team they start to see their defects. The players have to be prepared for criticisms, you have to be well prepared for that."

Brazil are on a five-match winning run since their disappointing World Cup and Dunga's men face Austria on Tuesday.

Dunga is happy with his squad, despite being without his Brazil-based players.

"You all asked for renovation after the World Cup and now you have got it," he said.

"It's good to have experienced players to balance things but it's also good to have young players with adrenaline, motivation, fresh blood.

"In this trip I'm dealing with problems for the first time and my problems is that in the first matches I had 22 or 23 players but now that I can't call players from Brazil, so I have less options.

"There's new players having their opportunities and several young players with a chance to impress. The competition for places is good for Brazilian football."