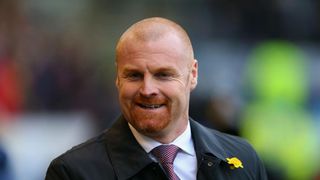 On Boyd, Dyche told Sky Sports: "He's been terrific for us I've known him a long time, I even played against him many moons ago believe it or not.

"He's stuck at it, he's stuck at his career, worked hard. He's honest as the day's long, I thought he was an honest player. He's a good fit."

Burnley's victory ended a seven-match winless run in the Premier League, but Dyche has no intention of letting his team rest on their laurels in the fight for survival.

"There's great belief in what we do here and you can see that for sure the desire to remain in the Premier League is there for all to see," he added.

"It's not all governed by results you have to see through the results and see if they are getting better and they are.

"Most of them have known me for a long time and know how I work. You hope it rubs off on them, as I've said we've been dented a few times but not broken, we like how the players work with that desire to press on the front foot.

"The next challenge comes quickly, so we'll make sense of this game we won't get too carried away."