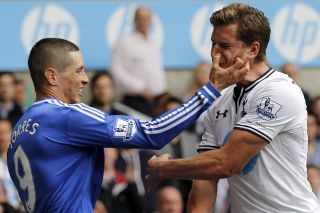 Speaking at the Leaders in Football conference on Wednesday, Dyke said Chelsea striker Fernando Torres was fortunate to escape further punishment for scratching Tottenham's Jan Vertonghen on September 28, as the referees partially sighted the incident that only earned the Spaniard a yellow card.

Torres was later sent off for a second yellow but avoided a hefty ban for the initial incident with Vertonghen - something Dyke said was avoidable in future.

"There was a change made in the summer," Dyke said, alluding to the use of video footage being made available to deal out retrospective punishments.

"We thought it would have dealt with the Torres situation.

Dyke also revealed his disappointment with the Premier League, who did not align themselves with an FA commission to guarantee more chances for home-grown talent in the English top flight.

"I was disappointed the Premier League didn't come on the commission but I understand why they didn't," Dyke said.

"What do I hope? Well I hope we come up with a set of proposals that everybody will buy into that give English kids a better chance of playing at the top level."

Dyke said the Premier League's heavy infiltration of foreign players can easily see young locals 'get lost' but he also conceded top-flight clubs do their utmost to support English talent.

"I think most people accept that if the England team is successful, it's very good for the whole of English football," the FA chairman said.

"I think people who own Premier League clubs buy into that."

Former England manager Glenn Hoddle joined the commission and Dyke was pleased with the coup - as ex-Tottenham midfielder has invested in a youth academy in Spain and is a prominent developer of talent.

"I met Glenn before I made the last speech and talked about it a lot," Dyke said.

"He's done a lot of work on this, he's thought about it a lot, he's coached overseas, he brings us a wealth of experience both as an England manager, a club manager and someone who's passionate about getting kids through the system and I think he'll be very valuable to us."