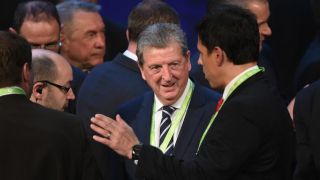 This year marks four decades in management for Hodgson, who took over Swedish club Halmstads at just 28-years-old and led the club to their first-ever Swedish title.

Since then, Hodgson's coaching career has seen the Englishman work in Finland, Switzerland, Italy, Denmark, Norway, United Arab Emirates and England, and Dyke believes Hodgson's appetite for knowledge and his openness to new experiences sets him apart from many of his contemporaries.

"Roy is a great example to any aspiring coach that being open to new experiences and cultures can really develop you as a person," Dyke told the FA's official website.

"His CV is quite remarkable and it is hard to think of another coach of his stature that has been prepared to learn and grow the way he has.

"According to the record books he started in Sweden in 1976 and here is about to take England to the European Finals in 2016, still inspiring and encouraging young players – good young English players.

"What a fantastic achievement – 40 years coaching at the level he has puts him up there with the great English coaches, much revered people like Sir Bobby Robson, Dave Sexton and Don Howe."

Dyke also praised Hodgson's ability to communicate, saying it has endeared the 68-year-old manager to supporters and staff alike.

"I am constantly amazed by supporters' reaction to Roy if you go to a game with him. He is genuinely liked," Dyke said.

"It is fascinating; wherever we travel people from different countries seek out Roy to share an experience they had of watching one of his sides, or talking to him about a player he once would have managed, or a coach that he knew. He’s probably done more for The FA’s international relations than anyone!

"We're very proud that, as England manager, Roy celebrates 40 years of coaching at the highest levels of our game. Long may it continue."