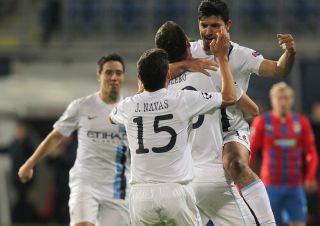 City scored three goals in 10 second-half minutes at the Doosan Arena to consign the Czech champions to defeat in the opening Group D encounter.

Striker Dzeko opened the scoring and Yaya Toure added a stunning second before Sergio Aguero, who also struck a post, capped a fine individual display with a third goal after 58 minutes.

Big-spending City have failed to progress from the group stage in the last two seasons, but they will have high hopes of reaching the knockout stages after such a promising start.

“It was the perfect start," Dzeko told Sky Sports. "The last two years we didn’t do that. We know that every team in the Champions League is strong and we are very happy to go home with three points.”

City did not have things all their own way as Plzen, who came through three qualifying rounds to reach this stage, gave a good account of themselves in the first half.

But City dominated after the break and ran out comfortable winners.

"As you can see, after the first goal we scored two more and finished the game, but in first half it was a little bit different. We had some chances to score then after I scored it was easier," Dzeko added.

When asked if he was pleased the new manager has put his faith in him, Dzeko continued: "It is very important. We have a very good squad with some new players and they’ve brought a lot of quality. There are a lot of games until the end of the season and everyone will get chance to play."

Meanwhile, Toure added another spectacular strike to his collection when he found the top corner from 25 yards. And the Ivory Coast midfielder was also delighted to make such a positive start to the campaign.

He said: "We had the desire, we wanted to win the game. It is always very hard in the Champions League and they played well.

"The last two years were disappointing for fans and the club. The target is to go to second round and as far as possible after that but we will see."