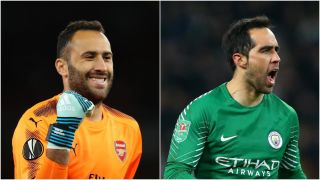 In Sunday's EFL Cup final, Manchester City and Arsenal will field goalkeepers boasting more than 200 caps between them for two of South America's heavyweight footballing nations.

Such experience and pedigree is not easily found or won, yet Claudio Bravo and David Ospina will walk out at Wembley viewed as their team's weak link.

Their selection at the weekend, Bravo ahead of quickly established City favourite Ederson and Ospina in favour of veteran Arsenal keeper Petr Cech, is primarily a result of Pep Guardiola and Arsene Wenger being men of their word, keeping their side of an uneasy truce.

"It's always a difficult decision, but I think we are clear about that since the start of the season," Wenger said when explaining Cech's Wembley watching brief.

"[Ospina] played in the whole competition. I have two world-class goalkeepers and I decided from the start to have clarity in the way we play and I will continue that."

Similarly, Guardiola considers there is barely a debate to be had over Bravo's status in City's final line-up, especially given he starred in penalty shoot-out wins over Wolves and Leicester City.

"Claudio is going to play. We are in the EFL Cup final thanks to him," said the Catalan.

"The goalkeeper is a different position to the other team-mates. It all depends on the performances and the quality but in this competition we are going to play Claudio."

The inherent difference of goalkeeping – its solitary and distant nature when compared to football's other tasks – identified by Guardiola is underscored in this instance by Bravo and Ospina's selections being entirely separate to those of their team-mates.

City and Arsenal's other 10 players will be picked because they are seen as the best men to do the job in their position and most likely to secure the season's first piece of silverware. Bravo and Ospina are clearly not; it is merely their turn to have a go again, casting them as charity cases in the midst of a cut-throat elite sporting occasion.

It is not a status that can possibly sit comfortably with men of their calibre, but one they have accepted because of the rewards days like Sunday. City and Arsenal are both out of the FA Cup, meaning the winner and loser may not play again this season.

Colombia international Ospina, who may still have the rest of Arsenal's Europa League campaign to fall back on, made his debut for Nacional in his homeland as a 17-year-old sensation. By 19, he was a full international and on his way to Nice and six seasons in France's top flight.

Bravo, 34, is a cap centurion with Chile and was also the shoot-out hero as they twice saw off Lionel Messi's Argentina in the 2015 and 2016 Copa America finals – his country's only major tournament triumphs. He was impregnable from 12 yards as Portugal exited last year's Confederations Cup in similar fashion.

By that time, however, a nightmare debut season at City where he only saved 57.5 per cent of shots faced had been endured. Bravo encouraged poise from defenders akin to a litter of kittens on the warmest metal roof. Ederson is not the only reason City are vastly better this term, but it is an improvement that damns Bravo's involvement in what went before.

Since Cech's arrival in 2015, Ospina's occasional Arsenal outings have not always inspired confidence. Carrying a corner over his line in a Champions League defeat to Olympiacos is not an ordeal the 29-year-old has entirely managed to leave behind.

English football has meant unfamiliar struggles, jolting Bravo and Ospina's careers of consistent high achievement. Their very presence at Wembley goes against the grain of the meritocracy fundamental to sport's showpieces, but it is unfair to cast them as joke figures. They have been heroes on the biggest stages before; do not be surprised if either grasps that mantle this weekend.

It would be impossible to begrudge either of these accomplished performers their moment in the sun before they retreat uncomfortably to the role of unused substitute – a cold and unforgiving place to occupy at any level of their famously lonely profession.