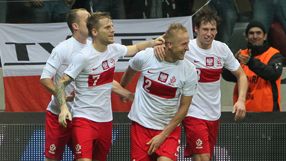 The eastern Europeans have not beaten England since their first competitive encounter in June 1973 and on a greasy surface after Tuesday's storm postponed the game by 24 hours, Poland's chance came and went in the 1-1 draw in a 2014 World Cup Group H qualifier.

"We were close to a historical victory. It didn't work but we tried," said Poland's manager Waldemar Fornalik, whose players shared his view.

"We could have even won, I think," said goalscorer Kamil Glik, while injured captain Jakub Blaszczykowski thought England were there for the taking.

"I feel disappointed. We had a chance. We could have won," he said.

Poland's players displayed more energy than their counterparts and England manager Roy Hodgson said his side had appeared less sharp than on Tuesday.

Fornalik also lamented the delay, saying his players had been itching to get on the pitch at the scheduled time for a shot at the former World Cup winners.

"We were even more charged than England last night and they would have had an even tougher time," said the Polish coach, who was unsuccessful as he lobbied to move the match to mid November.

FIFA moved the match after torrential rain turned the pitch inside Warsaw's National Stadium into a paddling pool when officials failed to close a retractable roof over the venue, leaving the Polish FA to face the music.

Polish Prime Minister Donald Tusk said earlier on Wednesday he had already asked the Sports Ministry and National Stadium's operator to explain the roof fiasco and warned "there would be no mercy to those who screwed up".

Fornalik, who took over the Polish side after the Euro 2012 co-hosts failed to make it out of its group at the tournament, said it was difficult to keep his team motivated after the delay.

Wednesday's game was played under the roof despite sunny weather and mostly clear skies and Fornalik said the one positive was the attitude of the fans.

"I am really amazed that people who were here last night and returned home at night came to cheer for us again today," he said.