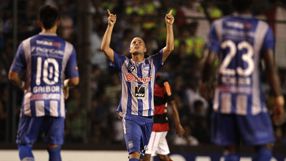 The 1981 South American champions, with Ronaldinho in inspirational form, got the victory they needed but in order to progress to the knockout phase they needed a draw at the Defensores del Chaco in the Paraguayan capital.

Instead, a stoppage-time goal from Emelec's Jose Quinonez right on the heels of an Olimpia equaliser gave the Ecuadorean side a shock 3-2 away victory that put them in the last 16 and left Flamengo's players in tears at the Engenhao.

Argentine side Lanus won the group with 10 points, followed by Emelec on nine and Flamengo on eight, a point ahead of Olimpia who won the last of their three Libertadores Cups in 2002.

Coach Joel Santana's Flamengo were left to rue their failure to close down two matches from which they should have taken four points.

Last week, they were drawing 2-2 with Emelec in Guayaquil but conceded a last-minute penalty. On their return to Rio they managed to avoid angry fans planning to pelt them with eggs.

Emelec made the most of the opportunity presented to them and Marcos Mondaini, man of the match in Asuncion, said Thursday's victory was reward for their persistence.

"It was like a final ... we hadn't taken any points away but we never gave up trying to win here," the Argentine striker told Fox Sports.

Flamengo went ahead in the 18th minute when their Argentine midfielder Dario Bottinelli sent a corner from the left to the far post where centre-back Welinton rose behind the defence to head home from close range.

The midfielder fed Uruguayan Mario Regueiro on the left, his cross to the right was brought down by striker Mariano Pavone into the path of Valeri whose stinging shot was pushed away for a corner by diving goalkeeper Felipe.

Flamengo increased their lead five minutes before the interval when Ronaldinho dribbled past three defenders on the edge of the box and passed right to striker Deivid, whose shot took a slight deflection on a defender and beat goalkeeper Agustin Marchesin.

Ronaldinho laid on Flamengo's third five minutes after half-time, jinking past two defenders on the left and pulling the ball back beyond the far post for midfielder Luiz Antonio who shot low past several defenders into the net.

In Asuncion meanwhile, Olimpia went in front on the stroke of half-time when goalkeeper Esteban Dreer could only parry Colombian midfielder Vladimir Marin's shot and Arnaldo Castorino scored but Emelec equalised in the 67th minute through Mondaini.

Three minutes from time, substitute Angel Mena put Emelec ahead. When Pablo Zeballos equalised two minutes into added time, fans and players at the Engenhao in Rio celebrated what looked like being a draw in Asuncion only to have their dreams shattered a minute later by Quinonez's header